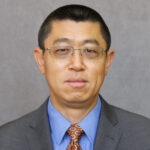 Weibo Cai, PhD, Professor in the Department of Radiology, and his Molecular Imaging and Nanotechnology Laboratory had another successful year at the Society of Nuclear Medicine and Molecular Imaging (SNMMI) Annual Meeting in Philadelphia this past June. The current Cai Group members received a total of 11 awards, setting a new record.

Christopher G. England, a former post-doc in the Cai Group and currently a Managing Editor at the American Chemical Society overseeing multiple journals such as Bioconjugate Chemistry, Molecular Pharmaceutics, and more, received the SNMMI Alavi-Mandell Award for his 2017 publication in the Journal of Nuclear Medicine.

Dr. Cai himself served on multiple committees/boards and played many roles at the Annual Meeting. Within the organization, Cai is the President of the Radiopharmaceutical Sciences Council (RPSC), Member of the SNMMI Committee on Awards, Committee on Councils and Centers, Committee on Scientific Program, the House of Delegates, and Committee on Radiopharmaceuticals. Cai is one of the two Vice-Chairs of the “Molecular Targeting Probes – Radioactive & Nonradioactive” Track, overseeing/organizing the entire track. In addition, he is the Sub-Chair of RPSC Young Investigator Award (YIA) Symposium, as well as the Sub-Chair of “Preclinical Probes for Oncology” Category of the “Molecular Targeting Probes – Radioactive & Nonradioactive” track.