UWSMPH Department of Radiology faculty David Bluemke, MD, PhD, and Vivek Prabhakaran, MD, PhD, were recently named to the 2020 Council of Distinguished Investigators by the Academy for Radiology & Biomedical Imaging Research, as recognition for their outstanding contributions to the field of medical imaging. This award recognizes the nation’s top imaging researchers, and also those who have achieved scientific excellence while also being involved in clinical care. Drs. Bluemke and Prabhakaran are two of only 39 people across the country selected to receive this award.

Dr. Bluemke, who joined the department faculty in 2017, is a professor in the Thoracic Imaging and Cardiovascular Imaging Sections. He came to the UW from his role as Radiologist-in-Chief of the National Institutes of Health Clinical Center. Dr. Bluemke was also a tenured senior investigator at the NIH National Institute of Biomedical Imaging and Bioengineering and Clinical Center, as well as an adjunct senior investigator at the National Heart, Lung and Blood Institute. Previously, Dr. Bluemke was a Professor of Radiology and Medicine at the Johns Hopkins University School of Medicine, Baltimore, MD. He has authored over 600 publications in the areas of diagnostic radiology and cardiovascular disease, including his work as principal investigator for MRI studies in the Multi-Ethnic Study of Atherosclerosis (MESA). Dr. Bluemke is the current Editor-in-Chief of the journal Radiology, the field’s most prominent publication.

Dr. Prabhakaran joined the department faculty in 2008, in the Neuroradiology Section, after completing his radiology residency and fellowship in diagnostic neuroradiology at Johns Hopkins Hospital, Baltimore, MD. He had previously completed is doctoral work at Stanford University Medical School, Palo Alto, CA, in cognitive neuroscience and functional neuroimaging. With affiliate appointments at the UW in Psychiatry, Neurology and the Neuroscience Training Program, Dr. Prabhakaran’s research laboratory focuses on developing fMRI and other multimodal neuroimaging tools for neurotranslational research that involves the characterization and treatment of different brain lesions such as vascular lesions – stroke, tumors and seizure pathology. His many peer-reviewed publications have appeared in high-profile journals. Dr. Prabhakaran is a frequently invited speaker and presenter at regional, national and international meetings. His work has been covered by large media outlets, including NPR, BBC, CBS News, Scientific American, and more.

Both Dr. Bluemke and Dr. Prabhakaran successfully met the stringent criteria of sustained productivity (including at least 25 peer-reviewed scientific research publications in which the awardee is first or senior author) and demonstrated accomplishments as an independent investigator of a substantial, ongoing research program (at least six cumulative years of funding as the Principal Investigator of a major competitive extramural research grant). Honorees will be inducted into the academy’s Council of Distinguished Investigators this fall during the RSNA’s virtual meeting. Previous awardees from UW-Madison Radiology include Professors Thomas Grist, Scott Reeder, Elizabeth Burnside, Perry Pickhardt, Patrick Turski, and Charlie Strother.

Greg Avey, MD, UWSMPH Department of Radiology faculty member in the Neuroradiology Section, and Director of Head and Neck Imaging, was a finalist in a crowded field of nominees to receive the annual The White Coat Investor Financial Educator of the Year award. Dr. Avey was nominated for this award by UWSMPH medical student Chris Rufus Sweeney, who began a quest for teaching financial literacy at the medical school and was introduced to Dr. Avey who was already teaching radiology residents and fellows about personal finance.

Dr. Avey had already recognized the impact student debt has on graduating medical students, and wanted to share his wisdom, knowledge and experience with his students to help them make intelligent choices to rebound from debt. “The median debt for medical students has increased over time to now over $200,000,” Dr. Avey said. “But at the same time, there has been a proliferation loan repayment and forgiveness options. It gets a bit overwhelming,” Dr. Avey said. “Plus, other financial planning needs, such as budgeting and insurance, also are important to consider at this transition time.”

The result of Dr. Avey’s and Chris Sweeney’s efforts was the development of new SMPH curriculum to help fourth year medical students to learn key concepts around budgeting, investing, insurance, and negotiation through independent and group learning experiences. The new course was formatted to allow students to better analyze financial decisions and understand the impact of these decisions on both their current and future financial health and broader personal wellness.

Dr. Avey took on the role to teach many of the classes, in addition to his other duties. “I wanted to help fourth-year medical students learn more about personal finance to navigate the critical juncture between accumulating debt and earning an income, so they could better understand how to allocate their precious resident dollars,” he said. Dr. Avey was one of eleven nominees for the White Coat Investor Financial Educator of the Year award. “This honor was a great surprise,” Dr. Avey said. “It is gratifying to see so many talented people taking up this important topic.”

Howard Rowley, MD,  the Joseph F. Sackett Professor of Radiology in the UWSMPH Department of Radiology, is  the recipient of the 2020 Gold Medal of the American Society of Neuroradiology (ASNR). Dr. Rowley is being recognized for his many contributions to stroke trials, dementia research, and advanced imaging techniques. See the full story from ASNR here. 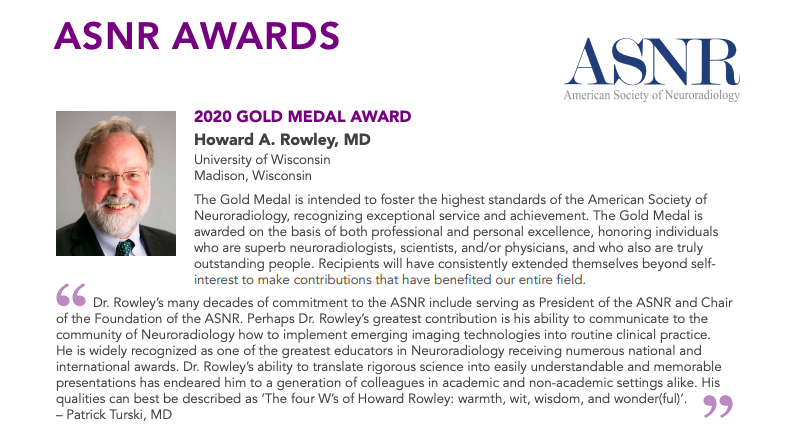 Christopher J. François, MD, FACR, Jeffrey P. Kanne, MD, FACR, and Mark A. Kliewer, MD, MHSC, FACR, were inducted as Fellows of the American College of Radiology will during the ACR 2020 virtual Convocation Ceremony on Sunday, May 17. Congratulations on this great honor!

Kandace Nowakowski, MSc, has accepted the position of Director, Radiology Services with oversight of UH, AFCH and TAC. Kandace will report to Gina Greenwood, and her primary work location will be at UH (office TBD). She will have oversight of the UH-based modality managers and operations. An exact start date has not been established and Kandace will continue to serve in her current role as we navigate the challenges associated with COVID-19 and work to return to pre-COVID operations. Discussion will be taking place regarding plans for Radiology management at The American Center. Kandace’s energy, commitment and competence drive the success that she has experienced, and will continue to serve her well in this new role.

The UW Small Animal Imaging & Radiotherapy Facility (SAIRF), led by radiology faculty member Jamey Weichert, PhD, was successfully awarded an NIH Shared Instrumentation Grant (SIG) S10 for an MILabs U-SPECT/CTUHR (ultra high-resolution) system. This system is scheduled for installation in late summer, 2020, and when installed, will be the only micro-SPECT system in Wisconsin. It allows for scanning animals up to the size of a large rat. SPECT applications include, but are not limited to, imaging of both standard and high-energy theranostic radioisotopes commonly used in brain, heart, bone and cancer. CT applications include, but are not limited to, imaging bone, lung and soft tissue with contrast, with resolution as good as 4 microns; a major upgrade to our current capabilities which are limited to 50 microns. See the full article here.
Laura Eisenmenger, MD, UWSMPH Department of Radiology faculty member in the Neuroradiology Section, is one of three University of Wisconsin-Madison early-career faculty members who will join the ICTR KL2 Scholars Career Development Program beginning this summer. For this highly competitive application process, Dr. Eisenmenger was nominated by our department as part of a system designed to select candidates having both individual excellence and potential to lead multidisciplinary research projects with high translational promise. The KL2 program provides 75% protected time to assist scholars with developing an independent research program, plus monthly career development seminars and other trainings designed to promote key NIH research competencies for clinical and translational research. Dr. Eisenmenger and two other selected scholars will join ten other Scholars who participate in one of the NIH-funded, workforce development programs at ICTR. NIH support for ICTR is through the national Clinical and Translational Science Award (CTSA) program that funds 60 plus centers nationwide.
Katie Yang, MSc, Department of Radiology Medical Education Research Services Outreach Coordinator, was recently awarded the Stephen Abramson Award for Innovation “Best of Cool Ideas” at the University of Southern California Keck School of Medicine 17th Annual Innovations in Medical Education Conference in Los Angeles. Katie’s project was entitled “Personal Sustainability Practice – Integrating Practical Wellness into the Preclinical Curriculum.”   Manoj Kumar, a graduate student working with Amy Fowler, MD, PhD, was recently awarded the Alavi-Mandell award as the first author on a paper published in the Journal of Nuclear Medicine. Manoj will be defending his PhD thesis next month. The article, titled “18F-Fluoroestradiol Positron Emission Tomography Imaging of Activating Estrogen Receptor Alpha Mutations in Breast Cancer,” was also co-authored by Dr. Fowler.   Sarvesh Periyasamy, an MD/PhD student in Dr. Paul Laeseke’s lab, received a National Institutes of Health (NIH) F30 Ruth L. Kirchstein Individual Predoctoral NRSA Award. Sarvesh is using a quantitative DSA technique we have developed to correlate degree of liver embolization with ischemic markers in tissue and hypoxia on FMISO PET (with Dr. Ali Pirasteh). The long-term goal is to be able to use quantitative DSA to titrate liver embolizations to a more optimal and standardized endpoint.

“We are so grateful for the tremendous work and personal sacrifice those individuals are making to provide care for our patients during this difficult time,” said Dr. Thomas Grist, Department of Radiology Chair. “Our department has always depended heavily on the efforts of those health care providers with direct patient contact, and this pandemic has reinforced how vital each of them are to the success of our department in taking care of our community.”

During the early ramp-up of the COVID-19 response, many department faculty members reached out to Dr. Grist to strongly voice their appreciation of the work done by front-line workers, which also includes many radiology team members. Dr. Grist and the Radiology faculty established the fund, which is a collaboration between the Department and one of Madison’s top caterers, Blue Plate Catering. The department faculty and staff made donations to the fund to deliver meals to those working at UW Health clinical sites now, and in the weeks to come.

To keep the meal delivery going, future donations are open to all faculty and staff. The hope is to provide at least one healthy meal each week to our hard-working staff for the duration of the crisis. For more information on how to donate, please visit https://www.blueplatecatering.com/home/feed-the-front-lines/. To make a direct donation using the link to the account on PayPal, please visit https://paypal.me/pools/c/8nTyn6Fk9a.

“All of us can be grateful that some of our front-line staff are able to enjoy a delicious and COVID-safe meal and perhaps take one less trip to the grocery store,” Dr. Grist said. “We also can be comforted by the fact that this is keeping a local business open and their front-line restaurant staff employed.” As a direct result of this fund, nearly $15,000 has been raised to date, and more than 330 meals will be delivered to the control areas of each respective unit this week.