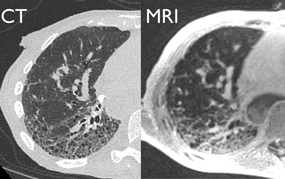 The UW Radiology Chest Imaging section not only provides world-class clinical service and resident and fellow education, but is also pushing into the emerging field of lung magnetic resonance imaging (MRI).

Computed tomography (CT) is the most commonly used cross-sectional imaging modality for imaging the chest, with excellent spatial resolution and high contrast between lung tissue and the adjacent air spaces. However, it requires the use of ionizing radiation which raises concern for possible radiation-induced cancer later in life.

MRI provides much better soft tissue contrast than CT, does not use ionizing radiation, and has the ability to measure pulmonary function (principally blood perfusion and gas ventilation). MRI, however, has yet to play a major role in lung imaging. This is because the innumerable air-tissue interfaces in the lungs cause the MR signal from the lungs to be extremely low using conventional MR imaging methods.

Over the past three years, the UW Radiology Chest Imaging Section has been working closely with the Department of Medical Physics to develop a new 3D MRI method called Ultrashort echo time MRI, or UTE MRI. Lung images obtained using this method approach the quality of CT images obtained a decade or so ago, a phenomenal advance from conventional MRI methods.

Building upon these promising early results, the lung MRI research team is now applying UTE MRI to image both lung structure and function (ventilation and perfusion) in a range of diseases, including cystic fibrosis, interstitial lung disease, asthma, pulmonary embolism, and lung transplant. The Chest Imaging Section of the UW Department of Radiology will be playing a leading role in the bright future of pulmonary MRI.