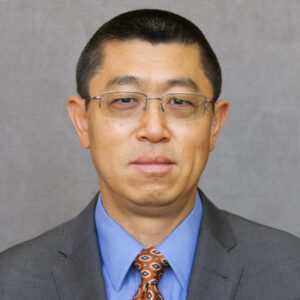 Weibo Cai is a Vilas Distinguished Achievement Professor of Radiology, Medical Physics, Materials Science & Engineering, and Pharmaceutical Sciences at the University of Wisconsin - Madison. He received a BS degree in Chemistry from Nanjing University, China (1995) and a PhD degree in Chemistry from the University of California San Diego (2004). Between 2005 and 2008, Dr. Cai did his post-doctoral research in the Molecular Imaging Program at Stanford University. In February 2008, Dr. Cai joined the University of Wisconsin - Madison as a Biomedical Engineering Cluster Hire, and was promoted to Associate Professor with Tenure in 2014, and Full Professor in 2018. Dr. Cai’s research at UW-Madison is primarily focused on molecular imaging and nanotechnology.

Dr. Cai is an active member of several scientific societies and he has served on various committees in these societies such as SNMMI Committee on Awards, SNMMI Committee on Scientific Program, SNMMI House of Delegates, SNMMI Radiopharmaceutical Sciences Council (Past President), etc. What Dr. Cai is most proud of is that his trainees at UW - Madison have received >130 awards to date, such as the 2012 Berson-Yalow Award from SNMMI, multiple Young Investigator Awards from SNMMI, several post-doctoral fellowships, among others. To date, more than a dozen of Dr. Cai’s trainees have started independent research groups at world-class universities (e.g. UW-Madison, Seoul National University, University of Utah, Zhejiang University, Shanghai Jiao Tong University, Nanjing University, Huazhong University of Science and Technology, Hong Kong Polytechnic University, Rutgers, etc.).