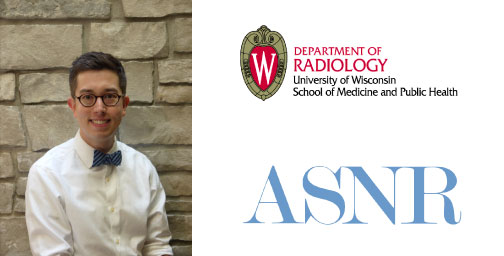 Neuroradiology Fellow Justin Brucker, M.D., received a pleasant surprise this fall when he earned the Outstanding Presentation Award from the American Society of Neuroradiology (ASNR). Awarded in the category of Functional Neuroradiology, the topic of the presentation was the use of quantitative MR in reversible feline demyelination.

Neurons are normally protected by a sheath of myelin, an insulating material comprised of lipids and proteins. However, diseases such as multiple sclerosis or Subacute Combined Degeneration (the human analogue of the feline disease investigated in the study) can cause the myelin to degenerate, resulting in symptoms ranging from fatigue and clumsiness to hearing and speech problems.

“The award and the attention are both unexpected and flattering,” said Brucker. While Brucker was the sole presenter of the study at the 2014 ASNR Annual Meeting, he co-authored the paper with Professor Aaron Field, M.D., Ph.D., and Professor Ian Duncan, DVMS, Ph.D. The purpose of the study was to investigate various quantitative MR parameters during sequential stages of central nervous system (CNS) demyelination and remyelination in felines. A portion of the subjects were placed on a diet of irradiated food to induce global CNS demyelination, and quantitative MR imaging was obtained at several different stages of the disease.

The study concluded that the diseased group showed decreased magnetic transfer ratio and saturation value, quantitative measurements which indicate myelin degradation. Those values subsequently rebounded during the recovery phase of the disease, correlating with the healthy outcomes of the subjects. In addition, recovery patterns of some subjects suggest that vitamin B12 supplementation may independently promote remyelineation.

The award is presented by the ASNR on behalf of the American Society for Functional Neuroradiology (ASFNR), and will be announced during the Awards Session at ASNR’s 53rd Annual Meeting in Chicago, Illinois April 25-30, 2015.