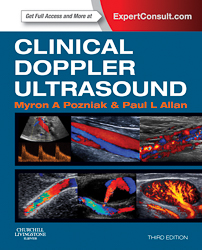 A Scottish radiologist and an American radiologist walk into the same lecture hall in Amsterdam — it sounds like the beginning of a joke, but that 1993 conference in Amsterdam was the beginning of a long partnership between Professor Myron Pozniak, M.D., FACR, FSRU, FSAR, and Professor Paul L. Allan, B.Sc., MB.Ch.B., DMRD, FRCR, FRCPE, Director of Radiology at the Royal Infirmary of Edinburgh.

“Paul Allan and I met at the conference, we liked each other’s lecture style, and we became friends. A few years later he called me, and proposed writing a textbook together,” said Dr. Pozniak. That collaboration resulted in the first edition of “Clinical Doppler Ultrasound,” released in 2000. The book received positive reviews, and was described as a “labor of love, and a future mainstay in the Ultrasound department,” by the Radiological Society of North America’s Bernice Capusten.

As Doppler ultrasound evolved, the excellent book sales and copious praise motivated the authors to produce a 2nd edition. It further enhanced the material in the first edition by identifying and describing new trends in Doppler Ultrasound. “Some of the chapters were a complete rewrite, but many were essentially an update based on a survey of literature and discussions with leaders in the field,” said Dr. Pozniak.

The 2nd edition was released in 2006, and featured new chapters discussing ultrasound contrast agents and the imaging of organ transplantation, as well as updates on cutting-edge technologies including harmonic imaging and pulse inversion imaging. “That edition was translated into seven languages,” Dr. Pozniak said, gesturing to a row of nearly identical textbooks on a bookshelf. He made sure to clarify that the edition sporting the Cyrillic alphabet is in Ukrainian, rather than Russianâ€”Dr. Pozniak is of Ukrainian descent.

Dr. Pozniak took over the duties of lead editor for the 3rd edition, which was released just prior to RSNA 2014. The addition of a new chapter on Doppler analysis of dialysis grafts, was praised as a valuable inclusion. This edition is also available electronically. However, celebration of the release has been tempered with sadness following Paul Allan’s unexpected death in January. Dr. Pozniak fondly remembers his colleague, saying, “It was a real pleasure to work with him; he was a leader of ultrasound in Europe. I lost a great collaborator, and a good friend.”

Our sympathies go out to his wife Helen and his sons Nick and Chris.