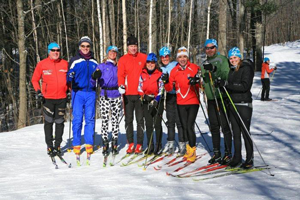 What do Vikings, skiing and multiple sclerosis have in common? They are all part of a recent initiative by UW scientists Dr. Ian Duncan of the School of Veterinary Medicine and Dr. Aaron Field of the Department of Radiology to support multiple sclerosis (MS) research and awareness by appearing as scientific experts in Norwegian film on the subject.

The documentary, titled “Multiple Sclerosis, The Vikings and Nordic Skiing,” was created by Norwegian-born documentarian Steinar Hybertson to show how an active lifestyle, specifically cross country skiing, can benefit those living with MS.

MS is a degenerative disease of the central nervous system which can lead to poor coordination, paralysis, and blindness. More than 2.3 million people worldwide live with MS, according to the National Multiple Sclerosis Society (NMSS), and the disease currently has no cure.

No one knows what causes MS, but according to a 1995 study by neurologists at Harvard Medical School, a genetic susceptibility to the disease may have been spread by the Vikings during their conquests. MS is most frequently found in countries inhabited by the Vikings and their descendants, including Scandinavia, the British Isles, the U.S., Canada, and New Zealand.

“The discovery of MS and its connection with the Vikings intrigued me,” Hybertson said. “one particular people — the Vikings — may have helped spread the disease through their genes and lust for travel.”

Maintaining an active lifestyle can benefit those with MS, especially by reinforcing balance, muscular and bone strength, and a healthy immune system, according to Dr. Duncan. Exercise also helps improve fatigue, which is one of the biggest challenges those with MS face.

Dr. Duncan has been an avid skier more than 30 years, and participated numerous times in a world famous marathon ski race, the American Birkebeiner. He began to think about the connection between MS and skiing when he was a participant in the American Birkebeiner raising funds for the NMSS in 2009. “I knew very well many people with MS who were skiers,” Duncan said. “I realized we had to have some sort of larger presentation, because there was a more important story that needed to be told.”

The film follows six individuals ranging from 26 to 55 years old who have been diagnosed with MS—three in the US and three in Norway—as they share their stories of their diagnoses and train to participate in the Birkebeiner.

“It’s important for patients with MS to know they shouldn’t give up anything they want to do, no matter the level of disability,” said Dr. Duncan. “You don’t have to be a super hero in a marathon ski race. Exercise of any kind is important.”

UW Radiology’s Dr. Field became involved in the project because he wanted to make an impact for viewers by combining expert information on MS with inspiring stories from patients themselves, he said.

“I find that patients and their families are hungry for information on their disease and on what’s being done to improve the way we diagnose, monitor, and treat it – especially when it comes to the strikingly detailed images of the brain provided by MRI,” Field said. “It seems that everywhere I go and talk about MS, someone tells me that they or someone they’re close to is affected by the disease; yet at the same time, so many people seem unaware of its impact.”

“Our ultimate goal is to have this documentary shown internationally to increase awareness of MS in the general public and provide hope and inspiration to patients, their families and friends,” Duncan said in a statement. “This is an exciting project and one we think will resonate with families everywhere who enjoy an active, outdoor lifestyle.”

The documentary, when finished, will be shown in the US on some public television channels, and in Norway on the NRK Network, according to Field. However, the team still lacks part of their budget, which will finance production costs. They have created a Kickstarter campaign to raise the remaining $20,000 for the film.

In accordance with the guidelines of Kickstarter, however, if they fail to raise the full amount, they will not receive any of the donations pledged to them. With 8 days remaining to raise the funds, the group has raised approximately $7,926 of their total so far.

For more information and to donate to the documentary project, visit: the group’s Kickstarter profile

The documentary will be broadcast on Wisconsin Public Television on December 19.

—
Update: On November 6, the last day of their fundraising, the group exceeded their goal and raised a total of $25,185. Two-hundred thirty one individuals contributed financially to the project. Those who donated were eligible to participate in a Google Hangout with the production team.