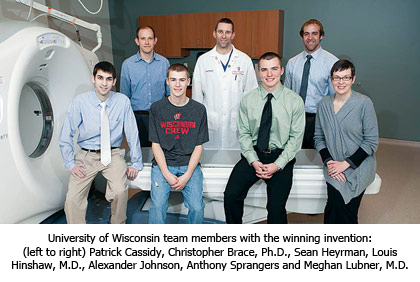 Be sure to pick up a March 2012 edition of RSNA News because this month’s edition gives a shout out to Chris Brace, Ph.D., an assistant professor in the Departments of Radiology and Biomedical Engineering, and his team of UW undergraduates.

The team’s winning invention, named BarrierASAP, is a unique, thermoreversible barrier used to protect healthy tissue while nearby cancer tissue is being removed. They presented their research, “Hydrodissection for Thermal Ablation: Development of Injectable Hydrogels to Increase Stability of the Insulating Layer,” at RSNA 2011.

This recognition follows on the team’s third-place finish in the national BMEStart competition last fall.

Congrats to all involved on this exciting media coverage!