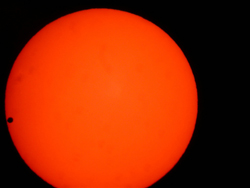 Our very own Dr. Frederick Kelcz, an associate professor in abdominal and breast imaging, is one of six winners of the second annual UW-Madison Cool Science Image contest.

The contest, an extension of the popular Cool Science Image feature by UW-Madison web magazine The Why Files, brings attention to the breathtaking combination of science and aesthetics.

Dr. Kelcz’s image is a stunning photo of Venus’ transit across a blaze-orange sun. He captured the image in June 2004 from the athletic fields near UW Hospital and Clinics. The Venus transit will be visible from Madison on June 5 this year, but then not again for one hundred years.

“I was a bit surprised, given the amazing, advanced scientific instrumentation available at the UW, that my handheld camera [attached] to a small telescope picture won one of the prizes in the Cool Science contest this year,” said Dr. Kelcz.

The 2012 Cool Science Image contest received 82 entries from faculty, staff and students on campus, six of which were chosen as winners. See the winning images and honorable mentions at news.wisc.edu.