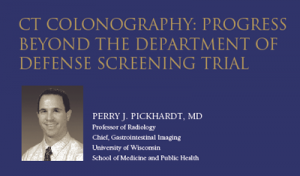 That effort began in 2004, while Dr. Pickhardt was stationed at the National Naval Medical Center in Bethesda, MD. Only two years removed from residency, Dr. Pickhardt served as the primary investigator on a multi-center Department of Defense study examining the polyp detection rate of VC. The study reported that virtual colonoscopy detected more than 90% of significant polyps in over one thousand patients, including 93% detection rate of polyps 8 mm or larger.

Published in the New England Journal of Medicine, the landmark trial was the first to show that VC, a less invasive test, was comparable to a traditional colonoscopy for screening. That study has since been cited over a thousand times by subsequent peer-reviewed publications, cementing Dr. Pickhardt and UW Radiology as leaders in the field of VC.

The efforts of the UW CTC team to improve VC over the ensuing decade have resulted in over 200 papers, numerous grants, and a VC textbook, co-written by Dr. Pickhardt and Professor David H. Kim, M.D. Dr. Pickhardt highlighted these efforts in the lecture, citing improvements in VC technique and interpretation.

These improvements have had an extensive impact on the clinical outlook of VC, according to Dr. Pickhardt. In fact, radiologic societies such as the American College of Radiology (ACR) have been calling for reimbursement of VC under Medicare, which would represent a huge boost in the number of eligible patients. The ACR points to the recent approval of a DNA stool test by the Center for Medicare & Medicaid Services (CMS) as evidence that VC should be covered under Medicare/Medicaid.

VC detects colorectal cancer and precancerous polyps far better than the DNA stool test, is more cost effective, and results in fewer false positive results, results that still require a traditional colonoscopy, according to the ACR.

Virtual Colonoscopy even has presidential approval: President Obama elected to have a VC over the conventional exam. While it’s not an official measure by any stretch of the imagination, Dr. Pickhardt and his colleagues are pleased with his choice.