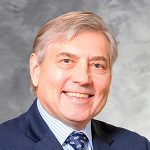 Patrick Turski, MD, FACR, a Professor Emeritus and former Chair of the University of Wisconsin SMPH Department of Radiology, in the Neuroradiology Section, was recently named the annual recipient of the Wisconsin Radiological Society (WRS) Flaherty Lifetime Achievement Award. The Flaherty Award is the highest honor bestowed by the organization. Dr. Turski was selected for his demonstrated contributions to the advancement of medical practice and lengthy volunteer service in leadership roles, which reflect with distinction on his practice of radiology in Wisconsin.

Dr. Turski, who retired from the Department of Radiology faculty last year, had a storied career as a neuroradiologist. In medical school at Rush Medical College in Chicago, he initially decided to practice general medicine, but during his internship and residency at UW–Madison, he met Dr. Joe Sackett, the Department of Radiology Chairman, who introduced Dr. Turski to the field and convinced him to pursue it as a career. He subsequently completed his neuroradiology fellowship at the University of California – San Francisco, where he was also awarded a Research Fellow Grant at the Centre International des Etudiants Medecins in Paris, France.

Dr. Turski joined the UWSMPH Department of Radiology faculty in 1981. By 1986, he had been named Chief of MRI, and became the neuroradiology Section Chief in 1993. From 1995 to 2005, Dr. Turski was the John H. Juhl Professor and Chair of the Department of Radiology. During his career he wrote 150 peer-reviewed articles, 25 book chapters, one monograph and book on MRA, and has been an invited lecturer at meetings across the globe. Dr. Turski has also been very active in the American College of Radiology, Wisconsin Radiological Society and the American Society of Neuroradiology organizations, serving in numerous leadership roles.

The Flaherty Award was named after the first recipient, Timothy Flaherty, MD, FACR, who is an inspiration to the field of Radiology with many accomplishments including being the past president of both the WRS and Wisconsin State Medical Society, throughout his 50-year career.

Congratulations to Dr. Turski on this momentous honor!