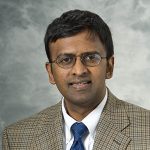 Strokes are the fourth leading cause of death in the United States, with ~800,000 people suffering each year from a new or recurrent stroke, and around four million Americans currently living with the after effects of a stroke. Dr. Prabhakaran and his team plan to collect neuroimaging (fMRI, DTI) and behavioral measures of around 190 stroke patients to assess the efficiency of novel BCI technology used to rehabilitate these stroke patients, in order to discover more effective stroke treatments.