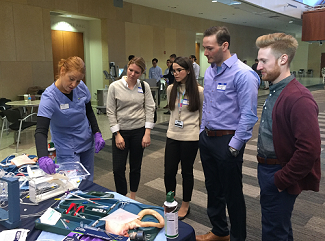 Over 30 medical students from six different medical schools attended the event, which included faculty lectures and participation in a two-hour hands-on workshop demonstrating interventional radiology techniques. Students travelled from as far as California to attend the symposium, including two students who arrived in Madison a day early to tour the department and meet UW faculty before the symposium. The Department of Radiology’s contribution allowed for the event to be free and to offer a special after-symposium social event at Oliver’s Public House to continue the discussions about interventional radiology.