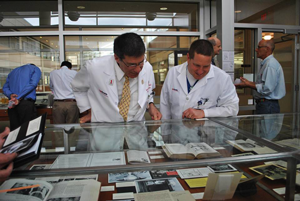 On May 30, the Department of Radiology had a non-traditional Grand Rounds as they paired with the Department of Medical Physics to visit an Ebling library exhibit entitled, “Fallout: The Mixed Blessing of Radiation and the Public Health.”

“Fallout,” according to a statement by the library, encompasses “historical examination of subjects such as the early use of x-rays in diagnosis & treatment, occupational hazards of working with radiation, UW’s Departments of Medical Physics and Radiology,” and many more topics through the media of images, artifacts, journals, and books from Ebling’s Rare Books & Special Collections. It was originally intended to run until April 1, was extended until August 31 due to popular demand, giving the Department of Radiology a chance to visit.

“I was pleasantly surprised with the outcome of the Fallout Grand Rounds,” Melissa Lantta, the Department of Radiology’s Education Coordinator, said. “I had visited the Fallout exhibit and thought it was an informative and engaging exhibit… [and] I heard from residents and faculty that they were able to learn something new from the exhibit.”

For curator Micaela Sullivan-Fowler, the opportunity to work with the Department of Radiology was similarly enjoyable. “I want to instill ‘aha moments’ in viewers, regardless of age, expertise, or profession,” she said. “There were still a lot of these moments going on, even with highly trained clinicians.” Sullivan-Fowler notes that radiology as a specialization is a “cutting-edge discipline, focused on moving forward, technology, and its applications.” However, she noted, she hoped the exhibit could imbue a sense of history in the Department of Radiology.

“[The field of radiology] is interesting, humbling, informative, and also affirming,” Sullivan-Fowler said. “[Our radiologists] can do incredible things like CT diagnostics, [in part] because of their predecessors who came before them.” When examining the exhibit, Sullivan-Fowler said, founders of modern radiology such as Curie, Roentgen, and Becquerel come to life as a sort of “family.” Sullivan-Fowler put portraits of the scientists in frames atop the cases to represent them, “like the family that helped [UW radiologists] make their discoveries.”

And speaking of laying the groundwork for discoveries, many important scientists in the field of radiology came from the UW. In fact, 2 glass cases in the exhibit are dedicated to UW pioneers like John Bardeen and include current trailblazers like Department of Radiology Chair Dr. Tom Grist and UW’s current partnership with GE Healthcare.

Sullivan-Fowler says she thinks UW Radiologists came out of the Grand Rounds with a sense of dignity in their profession. “They came from an extraordinary heritage of growth and evolution, and they’re part of it,” she said. “Especially here [at UW], they’re doing some amazing things. It was the biggest share I had.”