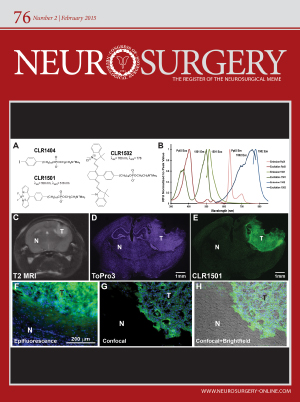 UW Radiology made headlines nationwide in February, when a cancer-seeking compound created by Associate Professor Jamey Weichert, Ph.D., made the cover of the journal Neurosurgery.

The paper, “Fluorescent Cancer-Selective Alkylphosphocholine Analogs for Intraoperative Glioma Detection,” was co-written with Associate Professor of Neurosurgery John Kuo, M.D., Ph.D., and was the second recent cover article the pair has published. A previous article, “Alkylphosphocholine Analogs for Broad-Spectrum Cancer Imaging and Therapy,” was featured on a June 2014 cover of Science Translational Medicine, and discussed the alkylphosphocholine (APC) tumor targeting platform. The Neurosurgery cover article focuses on a near-infrared contrast agent that can illuminate tumors during surgery, just one application of the APC platform.

Weichert and Kuo began by designing a molecule that takes advantage of a quirk of cancer cells: their inability to metabolize lipids. The cells have an overabundance of a certain type of lipid, due to the lack of an enzyme that would normally eliminate these fat molecules. The scientists created a base molecule that will not only seek out these lipids to target the tumor cells, but remain in the cells.

“This prolonged retention is where the therapy aspect comes in, because we can put a radioactive agent on the molecule, and it can radiate the cells from the inside. We want to radiate the cancer cells and cancer stem cells, but we don’t want to radiate normal cells,” said Weichert, during an appearance on Wisconsin Public Radio’s Larry Meiller Show.

The APC agent can target over 55 types of cancer, and can deliver an imaging agent in addition to radioactive medicine. Adding a fluorescent imaging agent to the base molecule creates a fluorescent effect that is detectable with many surgical microscopes. “It homes in on the tumors, and lights ’em up,” said Weichert.

This allows surgeons to see which cells are cancerous and which are healthy, helping them avoid cutting into healthy areas during resection procedures. There are a total of three molecules in development; the aforementioned fluorescent molecule, a radioactive, treatment-based molecule, and a molecule used for PET imaging.

Cellectar’s fundraising efforts have been outstanding, raising over $75 million toward the development of the drugs. The startup was listed on the NASDAQ stock exchange in 2014, joining nearly 60 other Wisconsin companies on the exchange. Cellectar opened a radiopharmaceutical manufacturing plant and analytical laboratory in late 2007, expanding on their original facilities located at University Research Park. These expansions allow Cellectar to be completely independent in the research, development, and manufacturing of the drugs.

While the drugs may not be on market for another four or five years, Weichert is pleased with the progress that has been made. “I’ve been working on these for close to fifteen years, and now we’re finally to the point where we can see what they can or can’t do.”

Learn more about the development and application of this molecule family at UW News.