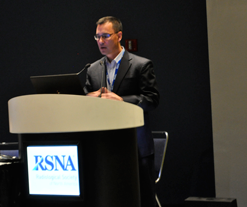 UW is a nationwide leader in microwave ablation, thanks to the efforts of the
Tumor Ablation Lab. Led by Fred. T. Lee Jr, M.D., and Christopher Brace, Ph.D., the lab has produced full-fledged ablation systems, dozens of patents, and a spinoff company called Neuwave Medical. Dr. Lee shared the insights gained from years of developing and performing MW ablations, in a talk entitled “The Case for Microwave Ablation.”

Perhaps the most interesting feature of microwave ablation is the shrinkage described by Dr. Lee. Microwave ablation heats the tissue to over 60 degrees Celsius in order to melt phospholipids, a major component of cell membranes. When the tissue near the probe is heated to these high temperatures, it pulls taut around the probe, pulling the tumor inwards. This phenomena is a byproduct of microwave ablation, and it wasn’t immediately noticeable. While Dr. Lee was creating his presentation, he went through his old studies to gather relevant information, and noticed the shrinkage effect for the first time on a 7-year-old video. An unintended positive side effect, like this shrinkage, is a rare and exciting find in medicine.

While all modalities of ablation can be successful, UW prefers microwave ablation because of the tumor control, speed, and simplicity. As the Tumor Ablation Lab continues to generate new techniques and devices, Dr. Lee will continue to lead the way.