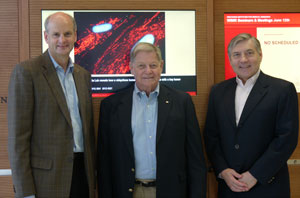 Dr. Sackett played a central role in perhaps the single most influential event in the history of the department: the 1979 cross-campus move to the Clinical Science Center. By 1978 he was serving as Vice-Chair of the department, under Chair Francis F. Ruzicka, M.D. Drs. Ruzicka, Sackett, and other department leaders were faced with the challenge of moving over two hundred patients from 1300 University Avenue to their new home at the CSC. After much deliberation, they devised a strategy. Using a convoy of eight appropriately equipped moving vans, they successfully transferred all two hundred patients, in just under four hours.

Dr. Sackett left an indelible mark on the department, in both his academic and leadership roles. But the most fabled story features the then-vice-chair as a research subject. Shortly after the move to the CSC, Charles Mistretta, Ph.D., was ramping up his work on digital subtraction angiography (DSA). As an entirely new technology, Dr. Mistretta’s lab needs for the development of DSA played no role in the planning for the CSC. Thus, when the move occurred, Dr. Mistretta was forced to repurpose space that was originally intended for a bathroom. This became the site of a legendary neuro examination, when Dr. Sackett volunteered to be imaged using DSA. The “trial” went awry, when Dr. Sackett promptly broke out in hives from the contrast injection. Guerilla research aside, Dr. Sackett’s drive served as an inspiration for his friends and colleagues and he was recognized for that passion in the early 1980s.

Dr. Sackett took over as chair in 1981, and was crucial to cementing UW Radiology as a clinical and academic powerhouse. The department grew at an unprecedented rate during the Sackett era, earning a four-fold increase in funding from the medical school, driven by increased revenues from the department. Publications doubled over the course of his tenure, from 60 in 1981 to 129 in 1995 (UW Radiology counted just under 200 peer-reviewed papers last year).

In addition, he oversaw a dramatic reorganization of the department in 1995, adding additional clinical sections to accommodate the fast-growing field. When he stepped down as chair in 1996, he ceded the position to Patrick Turski, M.D., FACR, leaving the department in more-than-capable hands.

During his visit, Dr. Sackett was particularly impressed with the changes at WIMR, commenting that tremendous progress had been made in three years. In light of his remarkable tenure as department chair, it’s quite the compliment.