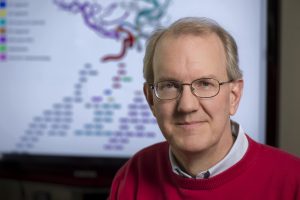 Abstract: Super-resolution reconstruction in medical imaging is traditionally carried out by combining multiple acquired images, each having different point spread function. Resolution is enhanced by combining the complementary Fourier information.  Extra imaging time and inaccurate image registration are problems with this approach.  In this talk, a new approach that exploits the presence of both low-res and high-res information in images with elongated voxels is described.  The approach, based on the use of a deep network trained on patches from the image itself, does not require external atlases or the assumption of self-similarity across spatial scales. Using this principle, resolution can be enhanced in 3D MR images and both resolution enhancement and anti-aliasing can be achieved in 2D MR image stacks.  This talk provides some background and history on super-resolution reconstruction and then presents this new algorithm, called SMORE, along with several experiments to illustrate and quantify its performance. Overall, this approach opens up new opportunities for improved medical image analysis using existing data as well as new opportunities for faster imaging.

Speaker Bio: Jerry L. Prince received the B.S. degree from the University of Connecticut in 1979 and the S.M., E.E., and Ph.D. degrees in 1982, 1986, and 1988, respectively, from the Massachusetts Institute of Technology, all in electrical engineering and computer science.  He worked at the Brigham and Women’s Hospital, MIT Lincoln Laboratories, and The Analytic Sciences Corporation (TASC). He joined the faculty at the Johns Hopkins University in 1989, where he is currently William B. Kouwenhoven Professor in the Department of Electrical and Computer Engineering and holds joint appointments in the Departments of Radiology, Biomedical Engineering, Computer Science, and Applied Mathematics and Statistics. Dr. Prince is a Fellow of the IEEE, Fellow of the MICCAI Society, Fellow of the AIMBE, and a member of Sigma Xi. He also holds memberships in Tau Beta Pi, Eta Kappa Nu, and Phi Kappa Phi honor societies.  He was an Associate Editor of IEEE Transactions on Image Processing from 1992-1995, an Associate Editor of IEEE Transactions on Medical Imaging from 2000-2004 and is currently a member of the Editorial Board of Medical Image Analysis. Dr. Prince received a 1993 National Science Foundation Presidential Faculty Fellows Award, was Maryland’s 1997 Outstanding Young Engineer, and was awarded the MICCAI Society Enduring Impact Award in 2012.  He is also co-founder of Sonavex, Inc., a biotechnology company based in Baltimore, MD.  His current research interests are in image processing and computer vision with primary application to medical imaging; he has published over 500 articles on these subjects.