Cryoablation is defined as cell destruction using cold temperatures. An ice ball is formed at the end of a cryoprobe, which freezes intra- as well as extracellular material to temperatures colder than -100 ˚C. The application of these extremely cold temperatures causes cell death. To consistently destroy tumor cells, it has become clear that temperatures must reach a certain threshold that is unique to the cell type and thermal environment of the targeted tissue. This specified range of temperatures falls between -20 and -50˚C, depending on the tissue. While originally designed solely for intraoperative use due to the large cryoprobe size and the risk of bleeding, cryoablation ice balls are easily visualized under CT and ultrasound, allowing minimally invasive percutaneous procedures. Probes down to 17 gauge in diameter are now available for percutaneous use. Cryoablation is also performed in the Operating Room during laparoscopic and open surgeries. 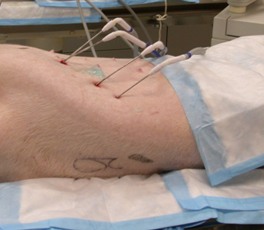 Modern cryoablation techniques have been widely used for the focal destruction of various types of tissue for more than 20 years. Cryoablation was the modality that ushered in the modern era of focal ablation of malignant tumors under real-time cross-sectional imaging-guidance. The advantages of cryoablation over other thermal ablation techniques include the ability to use multiple probes simultaneously; the near painless nature of the freezing process; the ease of monitoring the formation of ice with ultrasound, CT and MRI; the reproducible and predictable pattern of tissue destruction; and the relatively low complication rates. Disadvantages compared with heat-based modalities include the greater systemic effects seen acutely due to the lysis of cell membranes, and the lack of a cautery effect with freezing. Percutaneous cryoablation was previously not felt to be possible due to the large probe size, but smaller diameter probes have made percutaneous cryoablation a viable treatment option for selected tumors of the liver, kidney, bone, and lung.