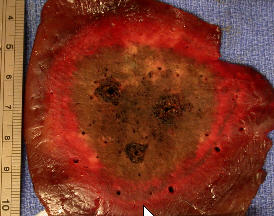 The clinical use of microwave ablation is expanding rapidly due to its inherent advantages over radiofrequency ablation. These advantages include direct heating of a volume of tissue, limited susceptibility to adjacent charred tissue, and ability to heat a large variety of tissue. The results are a larger zone of active heating with consistently higher temperatures, increasing confidence of tumor kill (2-6). In addition, for larger tumors multiple applicators can be powered simultaneously with resultant synergistic effects to create large zones of tissue destruction (7-9).

Microwave systems consist of three components: a generator, a power distribution system, and antennas. Generator frequencies utilized for ablation equipment are either 915 MHz or 2.45 GHz. Energy is distributed from the generator to the antenna via a coaxial transmission line. For the purposes of microwave ablation, antennas are straight and needlelike (10-12). Microwave antenna design requires the balance of power efficiency, tissue heating pattern, and antenna diameter. Antennas are constructed from coaxial cable, small diameter antennas can have trouble handling higher powers without thermal damage to tissue on the proximal shaft. To overcome this, cooling jackets around the entire shaft have been utilized (11-14). The most common method utilized to cool the proximal antenna shaft is circulated chilled saline or water. A novel strategy developed in the University of Wisconsin tumor ablation laboratory is the use of compressed carbon dioxide gas. Rapid decompression of this carbon dioxide gas within the antenna shaft causes the Joule-Thompson phenomenon, cooling the antenna shaft and feed lines. This high cooling capacity allows the use of high-power generators up to 140 W, while maintaining thin shaft diameters, 17 gauge.

The tumor ablation laboratory continues preclinical testing of microwave ablation systems to improve the understanding of the effect on multiple organ systems. Another goal of the tumor ablation laboratory is to evaluate the effectiveness of these modalities in treating patients. The Neuwave Medical Certus ablation system has been in use at the University of Wisconsin since 2010. Treated patients are followed to evaluate for recurrences following tumor ablation as well as to monitor for complications. To date, the early clinical results are promising (15-17).

This video is a 5 minute test, accelerated to 30 seconds.