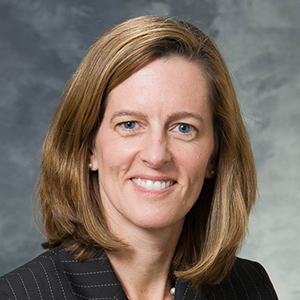 Elizabeth Burnside is a professor (tenure) of radiology in the University of Wisconsin School of Medicine and Public Health. Her degrees include an MD combined with a master's in Public Health as well as a master's degree in Medical Informatics. As a result, her research investigates the use of computational methods to improve decision-making in the domain of breast imaging in the pursuit of improving the population based screening and diagnosis of breast cancer. This multidisciplinary research is facilitated by affiliate appointments in the Departments of Industrial Engineering, Biostatistics and Medical Informatics, and Population Health Science at UW. Dr. Burnside has published over 90 peer review articles. Her research has secured continuous NIH funding since 2006 garnering a total of $4.6 million in extramural funding. She served as a charter member on the Biomedical Imaging Technology (BMIT) Study Section at the NIH. Dr. Burnside is a subspecialty trained breast imager with an active clinical practice providing all imaging and interventional procedure utilized for the early diagnosis of breast cancer. In addition to her role as a clinician scientist, Dr. Burnside has developed a track-record of mentoring clinician scientists and trainees from translational disciplines, also supported by NIH funding. Dr. Burnside was elected a Fellow in the Society of Breast Imaging in 2004 and a Fellow in the American College of Radiology in 2017. Most recent career milestones include assumption of the role of Deputy Executive Director of the Institute for Clinical and Translational Research (ICTR) and Associate Dean in the School of Medicine and Public Health (SMPH). Previously, she served as Vice Chair of Health Services and Outcomes from 2014 to 2017 and Vice Chair of Research in the Department of Radiology from 2010 to 2014. She participated in the Physician Leadership Development Program at UW Health, the Executive Leadership in Academic Medicine (ELAM) in 2010-2011, and the Joseph F. Kauffman Administrative Development Program in 2017.